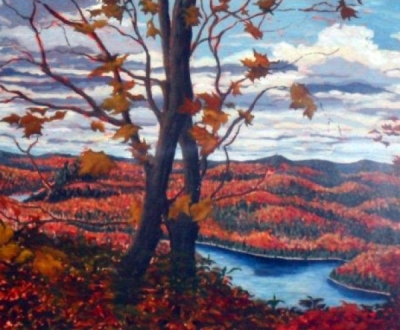 Jeanne Dumas is a Sault Ste. Marie native who lives in Batchawana where she owns Sunset Inn. Inspiration for her paintings isn't far away. She revels in the area between the Sault and Wawa, including the rugged terrain near the Montreal River. And the water. Just about all of her landscape paintings include water.

This is the area she wants to be in.  While a Sault Collegiate Institute student Jeanne spent her summer breaks as a child at a camp on Mile 45 along the Algoma Central Railway line. Achigan Lake was nearby.  It was home to her.

Jeanne Dumas has worked in watercolour and oil but switched to acrylics about two years ago.  She finds acrylic more convenient, especially if you are painting en plien air.

She was a member of the Algoma Art Society in the 1960s and rejoined about three years ago. Jeanne is also one of the five founding members of the Batchawana Bay Art Guild. That group, established in 2013, now boasts about 20 members from just north of the Sault to Wawa.

Painting is a gift Jeanne was given.  It's something she has always been interested in and enjoyed doing. As far back as she can remember Jeanne has enjoyed art.

Marilyn Guerriero, who taught art at Sault Collegiate Institute was a very encouraging and great teacher for Jeanne. She also regularly took art courses with instructors Ken MacDougall, Zoltan Szabo and John Keast.  Taking those classes spurred her on to produce work for the next week's class. It encouraged her to keep working at her art.

Visions North is a 1,000-square-foot art gallery at Sunset Shores Resort http://www.sunsetshores.ca/index.html.  That seasonal operation, opening Victoria Day weekend was launched several years ago and featured Jeanne's artwork along with other local artists.  Jeanne is putting the finishing touches on her own studio at 10244 Highway 17 North. The new space, on the Batchawana River, includes a kiln for pottery and sculpturing in clay.

Article and photo dated April 26, 2015, on Jeanne Dumas by Brian Kelly of the Sault Star:

View the embedded image gallery online at:
http://algomaartsociety.ca/component/k2/item/72-jeanne-dumas#sigProId6e329a6187
More in this category: « Gary Manzo Nancy Caldwell »
back to top