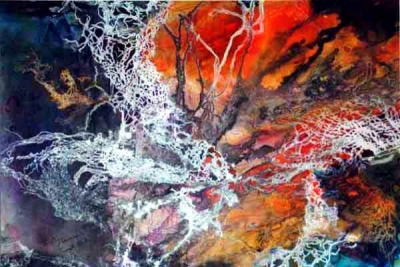 Phyllis Dorman grew up in eastern Ontario, relocating and settling in Sault Ste. Marie, Ontario.  Art has been a life-long pursuit for her and she has experimented in various mediums including: watercolours, oils, acrylic inks, acrylic paints, mixed medium, and stained glass. Although she has practiced her diverse artistic interests throughout her life, she began painting full-time in watercolours in 2002, and began exhibiting her work professionally shortly thereafter.

Classically, Ms. Dorman was known for her landscapes, where she is able to channel the scenic beauty of northern Ontario into her artistic work. However, more recently her art has moved toward the abstract with a component of realism and she has received four awards recognizing her talent in this area.

Phyllis has attended many workshops over the years and has trained with renowned artists: Helga Flower, and Linda Szabo. In addition to pursuing knowledge, Phyllis is also willing to share her talents: she has taught several art classes.

Ms. Dorman is a member of the Algoma Art Society in Sault Ste. Marie and maintains a studio, where she works. She is a recognized local artist who generously donates her time to the development of community artists in the city, in addition to her pursuit of painting.

Her work has been featured locally, nationally and internationally.

2018: Painting entitled "Under the Deck" accepted in the 62nd NOAA, as this was Phyllis's 7th piece accepted, she received her NOAA letters

2010 ACCEPTED IN: Juried Exhibition for the Olive Craig Gallery

2008 ACCEPTED IN: The Fall Festival of the Arts