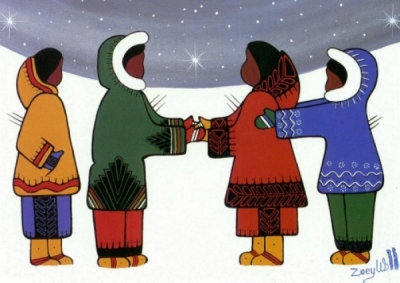 I work with acrylics, and  my favourite subject/genre is Aboriginal.  My art is painted in the traditional Woodland style that reflects my Odawa-Ojibway heritage. The originality of my paintings is marked by a combination of everyday experiences around me and the traditional legends of my heritage.

Also figuring heavily in my work is my own spiritual odyssey as a Christian. 'For a long time I was lost. I tried to blend into the dominant society but I never found a place when I felt good about myself. My Creator in His great love for me saw this and He opened up a way for me to get back in touch with who I am and where I come from. Today  He is leading me gently back to my culture, my heritage, and my people. He has done this through my art. My art and faith have become integral parts of my self-discovery. When I paint, I pray. I find that I get very dissatisfied with myself when I do not paint, and so, if I am not painting, I am not praying.

Today my husband Jim and I have made Bawating-the Rapids-Sault Ste. Marie our landing spot, our home. Together we have six grown children and many grandchildren. Jim is my greatest supporter. 'My family is very important to me. They have always believed in me, in my capabilities. They are part of my Sacred Circle - Gifts from  God."

I am from the OTTAWA NATION, WIKWEMIKONG UNCEDED INDIAN RESERVE on Manitoulin Island, ON.

As self-taught artist I have not received any formal education in art. In one of my report cards in grade school it read 'Zoey has no idea what art is'.

Health 2000 A Community Project International Institute of Concern for Public Health, TO. ON, 1991

1989 The Reporter 'A Harves of Friend-ship' cover page

In 1991, WEEJEETHOON, a worldwide 41 piece exhibition, intended to tour museums and galleries across Canada and to Europe and Africa. Zoey has 6 paitings in this exhibition. It traveled to Geneva, Switzerland, Cree House, Padua, Italy & New York, as part of the U.N. Conference on Indigenous People. It was organized by the Grand Council of the Crees of Quebec. This exhibition depicts the culture and daily life of African People through Native Canadian eyes.

PLAY - 1991 - 1993 The Future is R's was a play inspired by the 1991 calendar 'Sacred Earth'. The paintings and writings were by Zoey. The play was written by Joy Fedorick. It was based on a concept by Elizabeth Szathmary and presented by the Inner Stage of Toronto.

In 1994 this play was performed in French by Inner Stage.

Zoey's 'LAST SUPPER' was chosen as 'PHOTO OF THE DAY' by DISCOVERY in August of 2000.

1993 St. Anthony Daniel Church, Kaboni, ON The Stations of the Cross

1997 Our Lady of Sorrows Church, Goulais Mission, Stations of the Cross

2005 Holy Cross Mission, Wikwemikong, ON Holy Family & my version of The Pieta